From October 17th to 20th, the 2021 World VR Industry Conference (the Conference) hosted by the Ministry of Industry and Information Technology and the People's Government of Jiangxi Province was held in Nanchang, Jiangxi Province. The conference themed VR Makes a Better World - Integrated Development, Innovative Application has attracted a wide participation in the industry and JUFE made an impressive presentation by dint of its ten major achievements.

Establishing a Position at the World VR Industry Expo. It is the second time that JUFE has had a place at the Expo to showcase its achievements in VR production, talents training, research and application. It has attracted more than 6,000 visitors, including many provincial and municipal leaders, which further expanded JUFE's influence in the VR field. JUFE chairman Lu Fucai, president Deng Hui, Vice President Li Chungen and other leaders visited the JUFE booth, and accepted interviews from many news outlets.

​Fang Yuming team won another honor. Prof. Fang Yuming, dean of the School of Information Management, won the first prize of the Jiangxi Natural Science Award in 2019. After being approved a key project funded by the National Natural Science Foundation of China in 2021, the team was selected as the third batch of outstanding talents for innovation and entrepreneurship in the virtual reality industry in Jiangxi Province with the funding of one million yuan. Liu Qiang, Minister of the Organization Department of the Provincial Party Committee, awarded teams the prizes, and Fang Yuming spoke at the awarding ceremony as the award-winning representative.

Voice opinions at the Cloud Summit of the World VR Industry Conference. Deng Hui gave a keynote report at the VR+ Intellectual Property Protection Theme Forum, sharing his views on the frontier issues and challenges of VR+ intellectual property rights. Li Chungen also made one at the National Virtual Simulation + Vocational Education High-end Forum, and proposed seven measures for the VR Modern Industry College to empower the construction of vocational education. He was also invited as the guest of the round table forum of VR+ Application Innovation Theme Forum and shared ideas about Digital Development of all Industries Accelerating VR Application Innovation.

Successfully hosted high-level academic conferences. JUFE hosted the 21st China Virtual Reality Conference (China VR2021). Deng Hui delivered a speech on behalf of JUFE at the opening ceremony and Fang Yuming, as the chairman of the programming committee, was invited to give a report. In addition, JUFE hosted the 2021 International Conference on Virtual Reality and Visualization (ICVRV2021). Dr. Zuo Yifan was invited to be the chairman of the conference and Fang Yuming team won the conference's best paper award. Liao Guoqiong, director of the Academic Affairs Office and head of the Virtual Reality (VR) Modern Industry College, was elected as an executive member of the Virtual Reality and Visualization Professional Committee of the Chinese Computer Society.

Wang Cuifang team was awarded again. After being selected as the second batch of outstanding talents for VR industry innovation and entrepreneurship in Jiangxi Province in 2020, Wang Cuifang, deputy dean of Virtual Reality (VR) Modern Industry College, and her team won the VR\AR Innovation Award of the 2021 World VR Conference and the second prize of “Good Advice for the Development of the VR Industry”. 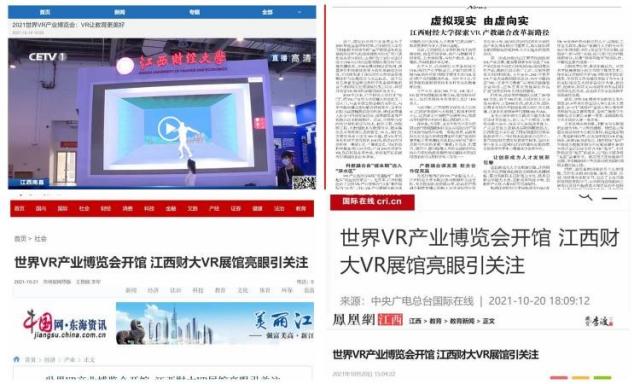