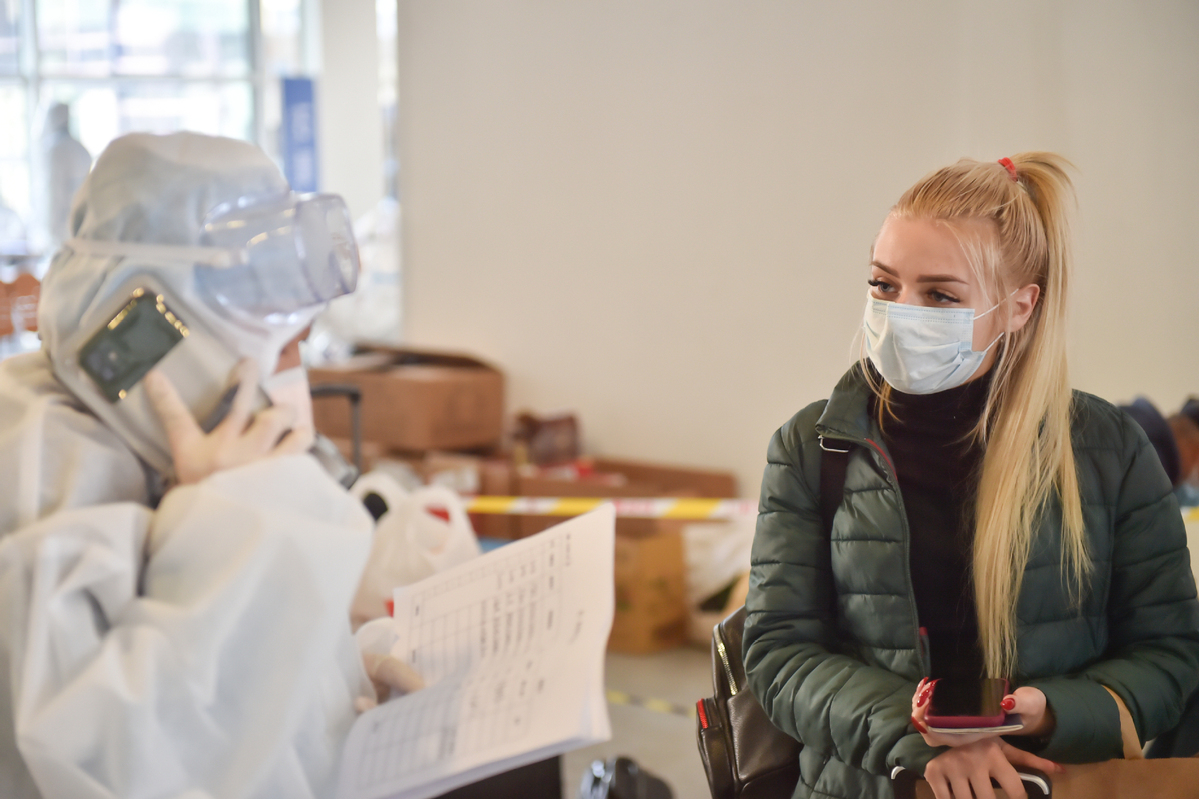 A staff member checks information of a woman on her arrival to China at the China International Exhibition Center (new venue), eight kilometers away from the Beijing Capital International Airport, in Beijing on March 17. [Photo/Xinhua]

​All overseas travelers, even those who are residents, must go to special sites

Beijing has tightened up quarantine measures for inbound travelers to contain the rising risks of imported COVID-19 cases as the epidemic worsens overseas.

From Thursday, all travelers from overseas have to be put under quarantine in designated places for 14 days when they arrive in Beijing, according to the capital's virus prevention leading group on Thursday.

For those who are over 70 years old or under 14 years old, as well as pregnant women and those with diseases who are not suited to be quarantined with others, they can apply for a 14-day home observation with strict assessment, said Xu Ying, a senior official with the city government.

Previously, inbound passengers were allowed to be quarantined at home provided they have independent residential apartments in Beijing. If not, they had to be isolated at designated places for 14 days.

Moreover, people who return to the country through other city ports but arrived in Beijing also must report their detailed health information to local authorities.

Accommodation and dining fees at designated isolation places need to be paid for by the travelers themselves. Those found to have concealed their travel history will face legal punishment.

A total of 149 quarantine sites have been set up in Beijing, Xu said.

Beijing has reported 65 imported COVID-19 cases-the most in China, with 22 newly confirmed between Wednesday and noon Thursday, according to the city's health commission.

Overseas Chinese students account for nearly half the imported cases in Beijing, with the majority coming from European and North American countries, said Pang Xinghuo, deputy director of the Beijing Center for Disease Control and Prevention on Thursday.

Beijing customs at the international airport have transferred 2,417 inbound passengers to hospitals for further testing since Feb 29, with a daily average of 127 people, according to Pang.

Over the past few days, the daily average soared to 288 with a peak of 479 on Wednesday, she added.

China for the first time reported no new confirmed locally transmitted cases on Wednesday, according to the National Health Commission on Thursday.

In Guangdong, 28 imported cases were reported by midnight Wednesday, with cases mainly from European and Southeast Asian countries, the local health commission said.

Starting Thursday, all people entering the province are required to receive nucleic acid tests and undergo quarantine for 14 days, according to a notice by the provincial disease prevention and control task force on Thursday.

The tests are free for all passengers entering the province, but they are required to pay for centralized isolation or medical treatment, the notice said.

Guangzhou, capital of Guangdong, has designated 40 hotels as sites for centralized medical observation for returnees, according to the city municipal government.